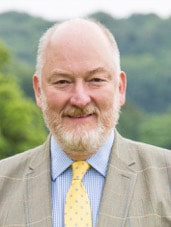 ​Mike was brought up and educated in Scotland, though he has lived in Dorset on and off since 1974 and permanently since 2007.  He enjoyed a successful first career of 37 years as an Army Officer, during which his experience majored on leadership, administration, personnel matters, welfare of soldiers and their families, education and training as well as project work and change management.  Mike left the Army in 2010, to take up his second career, as Bursar of a busy independent school, supporting the boarding and day education needs of 3-18 year olds, an appointment he thoroughly enjoyed.  He has previously been a governor of a primary school and is currently a governor of an independent school and a member of the local parish Parochial Church Council.

Mike is married to Annie and they have two adult children.  He retired completely in 2017 and they live locally with a very friendly and energetic Cocker Spaniel.  His main interests are home, family, friends and making maximum use of their small boat wherever it takes them in the English Channel.